With »ZUHÖREN«, Sasha Waltz & Guests opens up a »third dimension for encounters« for art, culture and communication from February 3-9. The program starts out from the expressive dance piece »Continu« (2010), which is about violence, the individual and the group. In view of the current situation concerning the need for asylum and civil society engagement, Sasha Waltz will host encounters and conversations with various notable persons. What artistic strategies do we have at our disposal to exert political influence? Exemplary projects from Berlin present their work. 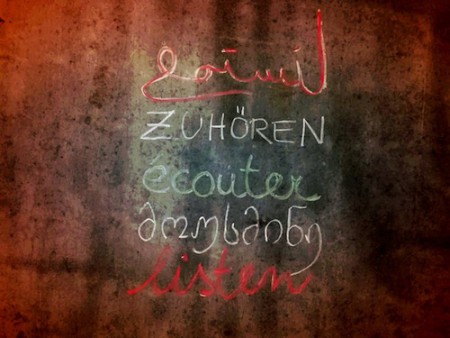 The company Sasha Waltz & Guests works with people from all over the world and enjoys a lot of hospitality on their tours. Sasha Waltz takes the shows of »Continu« and the highly relevant topics of flight and social activism as an opportunity to invite guests from the Middle East, the Mediterranien and Germany. The motto of these encounters is LISTENING: enabling dialogue and exchange on artistic strategies with regards to the political and humanitarian conflicts, the situation of women and model initiatives in the arts, media and everyday life.

FRIDAY 5. FEBRUARY 7 P.M.
WITH HERLINDE KOELBL, KARIM WASFI, STÉPHAN TALNEAU, GEORG DIEZ
How do artists deal with major crises and an increase in violence? The guests will present their current projects in photography and music, followed by a discussion.
Herlinde Koelbl, a German fine art photographer, will present her internationally acclaimed project »Targets«. She spent six years traveling through 30 countries to document military training sites and targets characteristic of the various countries. How are the images of the enemy constructed?
Karim Wasfi, an Iraqi cellist and conductor, gives an account of his work of many years as an artist and educator leading the »Iraqi National Symphony Orchestra«, of his way of dealing with attacks in the city, and of how the »Karim Wasfi Center for Creativity – Peace Through Arts« was founded.
Stéphan Talneau, French filmdirector, has been creating portraits of international musicians working in Berlin since 2008 in his series »Berliner-Moment«. The preview of his most recent film, in cooperation with Laurent Latappy, features the Arab music group »Orphe«. Presentation: Georg Diez, journalist and author
To be followed by the installation with food, live music and DJ.

SATURDAY 6. FEBRUARY 6 P.M.
CONVERSATION WITH KETI DOLIDZE, NINO HARATISHVILI, SALOMÉ JASHI,  JUTTA SCHWENGSBIER
Historically Georgia is a Christian country located between Russia and the Muslim Middle East. It was the setting of many violent confrontations during the 20th century. How do artists deal with this geographic position and history? The encounter of the Georgian artists starts out from a shared interest in women’s activism and a passion for stories.
Keti Dolidze, a Georgian actress and the director of the »GIFT Tiflis« festival, founded the »Women’s International White Scarf Movement« during the Georgian civil war in the 1990s.
Nino Haratishvili, a Georgian author and director, lives in Germany. Her epic family saga, »The Eighth Life (For Brilka)« makes it possible to experience the 20th century history of Georgia through the fate of four generations of women.
Salomé Jashi, Georgian documentary filmmaker und supporter of the development of a documentary film scene in South Caucasus portrays the region and its people and stories – even to the most remote places.
Gesprächsführung: Jutta Schwengsbier, International Correspondents Media Network
To be followed by the performance of »Continu« and the installation with food, live music and DJ.

TUESDAY 9. FEBRUARY 7 P.M.
CONVERSATION WITH YASMINE MEREI, CAROLIN EMCKE, MICT, CHRISTIAN MIHR
»ZUHÖREN« will conclude with a discussion focusing on Syria.
Yasmine Merei is a journalist, linguist and human rights activist born in Homs, Syria. She is managing editor of »Sayyidat Souria« (»The Lady of Syria«), the first non-religious women’s magazine in Syria, which aims to give a voice and a platform to a new generation of Syrian women. In 2015 she was Feuchtwanger Fellow at the artists’ residency Villa Aurora.
Carolin Emcke is a freelance journalist based in Berlin. She writes and talks about subjects such as globalization, war, human rights, theories of violence, bearing witness and cultural identities.
Mohammad Al Attar is a Syrian playwright and dramaturge. His last piece »Antigone of Shatila« (2015) tells the Greek story out of the perspective of Syrian women seeking refuge in Lebanon.
MiCT (Media in Cooperation and Transition) will present »Start FM«: a radio station focusing on culture and information in Arabic for refugees and migrants. A pilot program with guests and live music realized by MiCT – Media in Cooperation and Transition.
Presentation: Christian Mihr, Reporters Without Borders
To be followed by the installation with food, live music and DJ; Documentary film »Not Who We Are« by Carol Mansour (Lebanon). 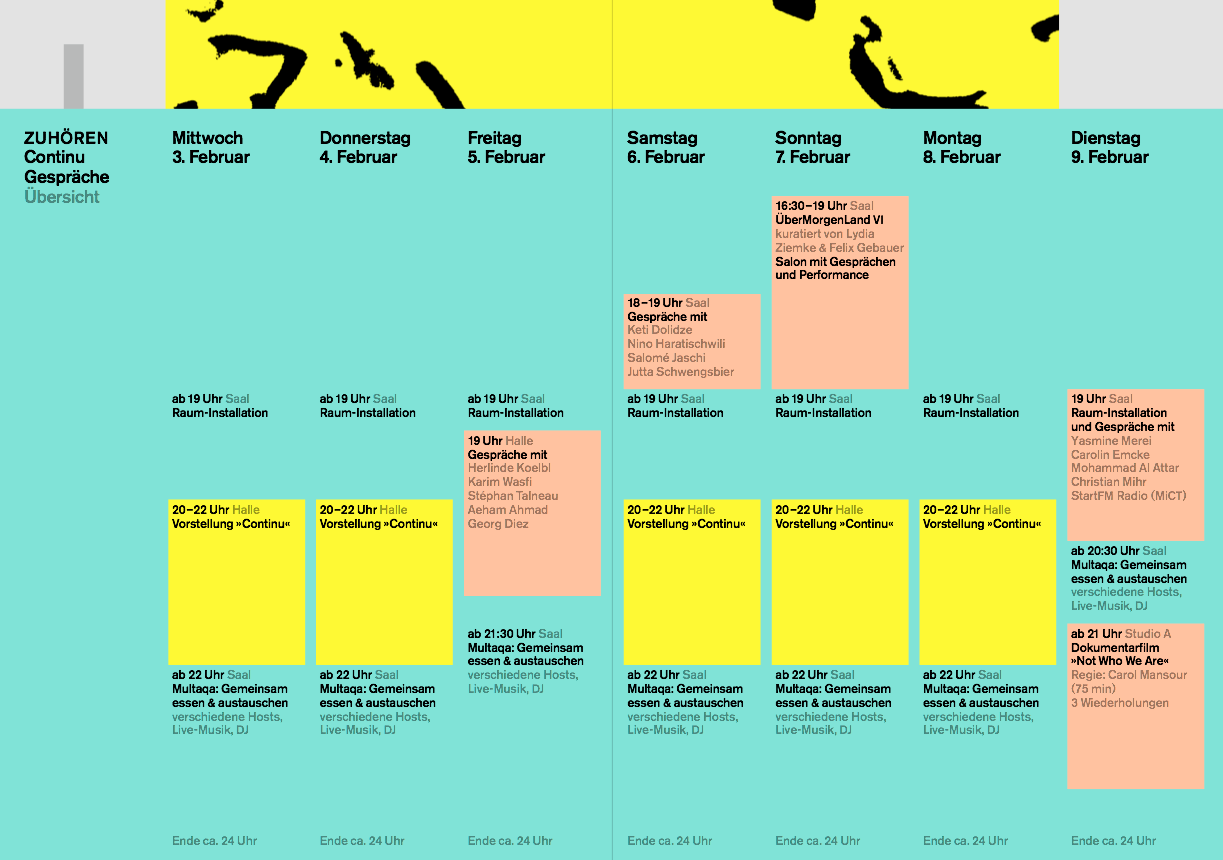 »ZUHÖREN« is a project of Sasha Waltz & Guests and is supported by Land Berlin and  Hauptstadtkulturfonds. Suported by RadialsystemV, Villa Aurora, MiCT – Media in Cooperation and Transition, suite42, tip Berlin.