On the last weekend of November, Sasha Waltz & Guests will open the doors of Radialsystem V to »ZUHÖREN«: artists, activists and audiences are invited to explore a space at the intersection of art and politics, private and public, featuring concerts, films, dance, conversation and shared food. This year »The Art of Resistance« and »Empowerment of communities« are the key themes of the edition. 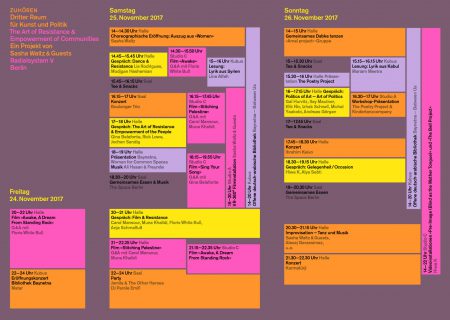 The company will present artists and activists from the Middle East, the United States, Brazil and Berlin, whose work presents forms of artistic resistance, contributing in unique ways to the creation and strengthening of new, diverse communities: among others with the artists Hiwa K and Rick Lowe, choreographers Lia Rodrigues and Modjgan Hashemian, the documentary filmmakers Carol Mansour and Muna Khalidi and the curator of the ifa-Galerie Berlin Alya Sebti. Itay Mautner (»Mekudeschet Jerusalem Season of Culture«), Michal Yaakobi (»Women Wage Peace«), Gal Hurvitz and Elik Niv (»Etty Hillesum Youth Theatre«), activist and artists engaged in peace activities in Israel, will present current projects. Also participating are the Berlin-based initiatives »Baynetna – Between Us, German-Arabic Library«, »Women for Common Spaces«, »The Space Berlin e.V.«, »Weiter Schreiben« and »The Poetry Project«.
Beside we invite to concerts with the »Boulanger Trio«, Alexej Gerassimez, »Ali Hasan und Freunde«, »Jamila and The Other Heroes«, Ipek Ipekcioglu’s and Petra Nachtmanova’s »Karmatürji«, a Dabke-dance-workshop for the whole family and a finale with improvisations of dance and music.

10 pm (Kubus)
Opening concert
MUSIC & INITIATIVE
Baynetna Between Us – German-Arabic Library, concert with Matar: Nabil Arbaain (oud) Ali Hasan (percussion), Cimon Schmidt (guitar, vocals)
The German-Arabic library Baynetna (Arabic: »Between Us«) is a salon and a lending library at the same time. For ZUHÖREN the library will be housed in the Kubus at Radialsystem V and invites with a concert of the band »Matar« and readings by Lina Atfa and Mariam Meetra of »Weiter Schreiben«.
www.baynetna.de

2 – 8 pm (Kubus)
INITIATIVE
Baynetna Between Us – German-Arabic Library
The German-Arabic library is open on Saturday and Sunday from 2-8 pm.

4-8 pm (Studio A)
DANCE 360° Film-Installation
In collaboration with INVR.SPACE
As part of her research for the choreography »Women«, Sasha Waltz worked with 360° virtual reality technology for the first time. Twenty members of the ZUHÖREN audience at a time will be able to use VR-glasses to watch a 15 minute film excerpt, moving freely through Studio A and perceiving choreography from new perspectives.

4:15 pm (Studio C) and 9 pm (Halle)
FILM
Stitching Palestine
Documentary by Carol Mansour and Muna Khalidi (Lebanon 2017)In »Stitching Palestine« twelve prominent Palestinian women give an impressive account of their individual experience of exile, addressing questions of loss, displacement and identity. Despite the diversity of their experience, the participants are linked by the traditional Palestinian art of embroidery and by their powerful female self-confidence.
www.forwardfilmproduction.com/stitching-palestine

5 pm (Halle)
CONVERSATION
The Art of Resistance & Empowerment of the People
with Gina Belafonte and Rick Lowe, in conversation with Jochen Sandig
Gina Belafonte and Rick Lowe are two members of a generation of politically-engaged US citizens deeply inspired as children by the civil rights movement in the 1960 and 1970s, which campaigned for equality for African-Americans. Together with Jochen Sandig of Sasha Waltz & Guests, they will reflect on how initiatives can reach a »tipping point« within the broader population, thus enabling change on a large social scale.

6 pm (Halle)
PRESENTATIONS INITIATIVES & MUSIC
Women for Common Spaces (Berlin)
with Yasmine Merei
Founded by the Syrian journalist and human rights activist Yasmine Merei, »Women for Common Spaces« is a non-profit initiative which aims to establish a network of self-confident, well-informed, qualified and engaged Arabic-speaking women in exile. In the project’s workshops, conducted in Arabic, women discuss the experiences and challenges they have faced, explore political and social themes, and process their thoughts in writing.
www.facebook.com/women4commonspaces/
Baynetna Between Us – German-Arabic Library
with Dana Hadad, Ali Hasan, Ines Kappert, Mouhannad Qaiconie, Maher Khwis
The German-Arabic library Baynetna (Arabic: »Between Us«) is a salon and a lending library at the same time. For ZUHÖREN the library will be housed in the Kubus at Radialsystem V. The founders will present their project, surrounded with music by Ali Hasan (percussion), Cimon Schmidt (guitar), Joel Holmes (keyboard). baynetna.de/

6:15 pm (Studio C)
FILM
Sing your song (2011)
Documentary by Susanne Rostock with Harry Belafonte produced by Gina Belafonte
Most people are familiar with Harry Belafonte’s achievements as a singer and entertainer, but this film presents his leading role in the American civil rights movement and his major contribution to social justice around the world.

6:30-8 pm (Saal)
SHARED MEAL and MUSIC
The Space Berlin e.V
Issa Khatib and Rawan Hourani offer a selection of dishes from all over the world, introducing fresh approaches with their culinary creations, accompanied by live-music.
www.thespace-berlin.org/

8 pm (Halle)
CONVERSATION
Film & Resistance
with Carol Mansour and Muna Khalidi (documentary filmmakers / Beirut) in conversation with Anja Schmalfuß (Sasha Waltz & Guests Berlin)
Two new documentary films, one from Lebanon and one from the United States, are central to this year’s ZUHÖREN: »Stitching Palestine« (2017) and »Awake, A Dream from Standing Rock«. A conversation about film as a form of protest, a means of breaking through stereotypes and a source of new perspectives, and the filmmakers’ motivations in their struggle to make a better life for future generations.

9 pm (Halle)
FILM
Stitching Palestine
documentary by Carol Mansour and Muna Khalidi (Lebanon 2017)
In »Stitching Palestine«, twelve prominent Palestinian women give an impressive account of their individual experience of exile, addressing questions of loss, displacement and identity. Despite the diversity of their experience, the participants are linked by the traditional Palestinian art of embroidery and by their powerful female self-confidence.
www.forwardfilmproduction.com/stitching-palestine

10 pm (Halle)
PARTY
Jamila and the other heroes
»Jamila & The Other Heroes« is a young Berlin band which creates a danceable living melody by combining soul, funk and rock with Arab folklore and electronic sounds.
www.jamilaandtheotherheroes.com/epk
Dj Emil Torp
Parole Emil! doesn’t tie himself to any style. Inspired by deep Afrobeat, British Soul and Middle Eastern hip-hop and trap, he always has fat bass, kicking rhythms and amazing solos.
https://soundcloud.com/emil-torp

2-10 pm (Studio C)
VIDEOINSTALLATIONS
Hiwa K: »Pre-Image (Blind as the Mother Tongue)« and »The Bell Project«
The artist Hiwa K, born in Iraqi Kurdistan shows two video-installations: His video work for documenta 14 simulates the experience of walking through foreign territory, Hiwa K developed it further and shows it for the first time at ZUHÖREN. In »The Bell Project« the artist reverses the ancient process of melting down bells into weapons: bringing metal that once formed part of weapons back into Europe, he then has it transformed into a bell, using the old ways of the craft.

3:30 pm (Halle)
PRESENTATION INITIATIVE
The Poetry Project e.V.
with Samiullah Rasouli, Susanne Koelbl, Aarash D. Spanta i. a.
In the Eastern world, poetry is largely a familiar form: poems are regarded as the collective memory of the people, to which all contribute. For two years, children between the ages of fourteen and eighteen, all of whom had fled to Europe alone, met regularly with mentors in Berlin to write verses about the fear of death, foreignness and longing. This resulted in very personal poems, revealing that, under the rubble of war, the poetic soul of a centuries-old civilization lives on in this young generation, still beautiful and unbroken.
www.thepoetryproject.de

4 pm (Halle)
CONVERSATION & PRESENTATION
Politics of Art – Art of Politics
with Itay Mautner (»Mekudeshet, Jerusalem Season of Culture«, Jerusalem), Michal Yaakobi (Women Wage Peace, Israel), Elik Niv (Dancer / Choreographer), Gal Hurvitz (Director of Etty Hillesum Youth Theatre, Tel Aviv), Izhak Schnell (Professor Geography / Tel Aviv) in conversation with Andreas Görgen (head of the department for culture and communication at the Federal Foreign Office)
An increasing number of people in Israel are asking themselves »What could a peaceful common future look like, and what can each of us specifically do?« Many are becoming active in new alliances, often through the medium of art.
The »Mekudeshet, Jerusalem Season of Culture« is an annual, multi-disciplinary culture festival in Jerusalem that specializes in »city-specific« art. »Mekudeshet« believes in art and culture as tools for political and social change and wishes to create a new, open and more tolerant reality in Jerusalem. The peace initiative »Women Wage Peace« is a broad-based grassroots movement founded after the Gaza War of 2014 and counts among its members women from the political Right, Center and Left, Jewish, Muslim, Christian and secular, all united in the demand for a political agreement to end the Israeli-Palestinian conflict, and increasing the number of women in all aspects of negotiation.
The dancer Elik Niv and the theatre director Gal Hurvitz present the project »A (Micro) History of World Economics, Danced« by Pascal Rambert at Etty Hillesum Youth Theatre with a group of sixty young people and adults of different origins and religions in the old town of Jaffa.
www.ettyhillesum.org/

4.30 pm (Studio A)
WORKSHOP-PRESENTATION
The Poetry Project e.V. & Teens of the Kindertanzcompany Berlin by Sasha Waltz & Guests
Since September 2017, the young poets have come together in workshops with teens from the Children’s Dance Company Berlin, collectively improvising in both dance and language. In a workshop presentation, they present the first results of a new collaboration. The music is provided by the duo Kalkutiran, the Persian percussionist Jawad Salkhordeh and the Indian musician Babua Pahari, who play tumbak, daf, bansuri and tabla.
www.thepoetryproject.de

5:45 pm (Halle)
CONCERT
Ibrahim Keivo
Ibrahim Keivo is a well-versed expert on the cultural diversity of Northern Syria and its musical traditions. He sings in the many dialectics of his homeland and plays buzuki, oud, saz, baglama – the traditional instruments of the region.

6:30 pm (Halle)
CONVERSATION
Gelegenheit I Occasion
with Hiwa K (artist / Berlin) and Alya Sebti (curator ifa Gallery Berlin)
The artist Hiwa K, born in Iraqi Kurdistan and the curator Alya Sebti, born in Morocco, both live in Berlin. They have many connections and common acquaintances, but somehow the right occasion for a meeting and an artistic exchange never came about. Now, for ZUHÖREN the two are seizing the opportunity to have a conversation. They will explore the terrain of their common neighborhood: art, language, and the stories of their lives.

7 – 8:30 pm (Saal)
SHARED MEAL – The Space Berlin e.V.
A seasonally and thematically appropriate kitchen will provide delicious treats: Issa Khatib and Rawan Hourani of The Space Berlin offer a selection of dishes from all over the world, introducing fresh approaches with their culinary creations.

8:30 pm (Halle)
DANCE and MUSIC
Improvisation
with Sasha Waltz & Guests and among others Alexej Gerassimez (percussion)
Improvisation is an integral part of the work of Sasha Waltz & Guests. It is also a method for approaching and getting to know a theme, a piece of music or a new group of people. As the closing event of ZUHÖREN dancers and musicians will meet on the large stage to seize the moment.
Alexej Gerassimez is as varied as the numerous instruments he plays. His repertoire includes classical and modern music, jazz and minimal music, as well as his own compositions.