In the frame of an solo-evening Sasha Waltz & Guests is presenting on December 19. and 20.  »precarity positions« by and with Todd McQuade and »40.000 centimetri quadrati« by and with Claudia Catarzi at Radialsystem V, Berlin.

Todd McQuade began his training as a dancer when he was 8. He was a dancer with The Los Angeles Opera, the Mark Morris Dance Group, Hubbard Street Chicago II, The New York City Opera, Mikhail Baryshnikov’s Hell’s Kitchen Dance, Aszure & Artists, the Trisha Brown Dance Company, Meg Stuart Damaged Goods, Gerard & Kelly and Sasha Waltz and Guests. He is an Artist who’s practice incorporates sculpture and performance. He recently turned 34. He plans to graduate from UCLA’s MFA program in 2018. www.toddmcquade.org
Max Hershenow is a music producer and one half of the band MS MR. In addition to his work with the band, he writes and produces with a variety of singers and songwriters, is working on score for two films, and has directed and choreographed a number of dance and theatre pieces. He lives in Los Angeles.

Produced and created in the frame of PAM Residencies in Los Angeles, presented by Sasha Waltz & Guests. 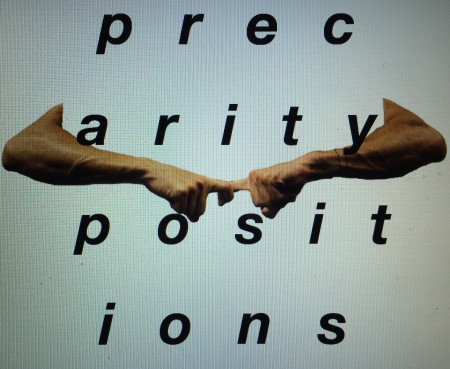 One only body, reduced to the essential, which brings itself to the stage in a limited space. Claudia Catarzi starts from the desire to rediscover what solely body can still restore, with its unconditional honesty, allowing the idea to reside in movement, with the potential of fascinating which is in the realm of the act and yet speaking the same language of the dance. To research in order to find, within a precise limit, accessibility to impossible conditions, discover the flexibility of the body while residing in specific spaces. The constriction affects the intelligence of the body which expresses capability of adaptation. The time spent in this area is vital humus.

Claudia Catarzi started her carrier working with Micha Van Hoecke’s Ensemble (artistic director of Mudra by Maurice Béjart). Later she was part of important companies such as Constanza Macras’ Dorky Park (Berlin), Iztok Kovac’s En-knap Group (Ljubljana), Compagnia Virgilio Sieni (Florence), Cie Ambra Senatore (France), Sasha Waltz & Guests. She was part of a research project with the Israeli choreographer Yasmeen Godder. She participated in Peter Greenaway’s short film The Towers. These rich experiences have led to creating her solo Qui, ora in 2011, which was awarded numerous prizes and was selected for Aerowaves Spring Forward Festival. Her other solo Sul punto won the jury and the audience’s award at Romaeuropa / Festival DNA 2013.

Produced by Company Blu with the support of MiBac and Tuscany Region, presented by Sasha Waltz & Guests.