Toshio Hosokawa”s »Matsukaze« premiered in Brussels as a choreographic opera by Sasha Waltz – German premiere in Berlin in June 2011, since then the piece came back to stage at Berlin”s Staatsoper only once, in 2013 – we now look forward to the upcoming summer revival: 10 – 12 July 2015, Staatsoper im Schiller Theater! 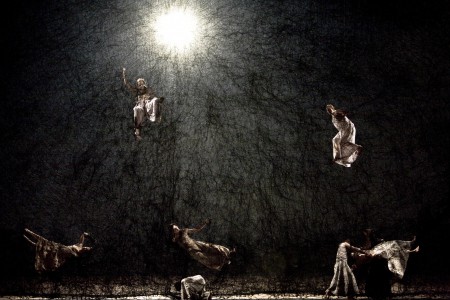 »Matsukaze« captivated both the audience and the critics. This version of  a classic of Noh-theater – a story of two sisters” unfullfilled love between here and now and the underworld – was the first, long-awaited cooperation between Sasha Waltz and the contemporary Japanese composer Toshio Hosokawa. In »Matsukaze«, with the exceptional soloists Charlotte Hellekant and Barbara Hannigan, the divisions between dance and song become blurred.