Sasha Waltz & Guests is coming on December 4th and 5th 2015 with »Continu« to the Brooklyn Academy of Music (BAM), New York in the frame of the Next Wave Festival. 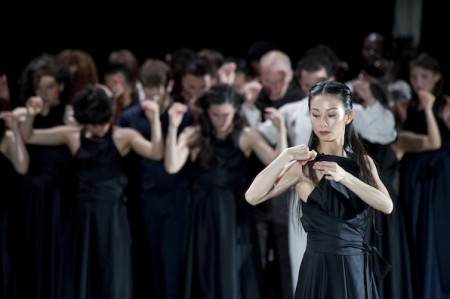 In »Continu« a field of tension between choreographic, musical and visual currents of energy is generated, while the title denotes the continuity of the perpetual forces of Nature. Sasha Waltz engages in »Continu« with primary impulses deriving from her major projects for museums of 2009 – the artistic inaugurations for David Chipperfield’s Neues Museum Berlin and Zaha Hadid’s MAXXI in Rome. Employing twenty-four dancers she has conceived a large-format, archaic choreography. The epochal symphonic work »Arcana« by Edgard Varèse represents the musical core of »Continu«, which is then complemented by compositions by other artists like Iannis Xenakis and Claude Vivier.
Ninety years ago Varèse – a visionary artist like no other of his time – promulgated the combining of artistic and scientific content. One may speak of transformation, of change, of awakening in respect to »Arcana«, though it be not so much a matter of alchemy as of a colossal nocturnal volcanic eruption, the Promethean temptation to take possession of the cosmos encompassed by and through sound.
Since the 2010 premiere of »Continu« in Schauspielhaus Zürich the piece has been revised several times and in Salzburg, summer 2011, Sasha Waltz presented the final version. The beginning of the new version includes the percussion solo »Rebonds B« by Iannis Xenakis, which will be performed live by the percussionist Robyn Schulkowsky.
Duration